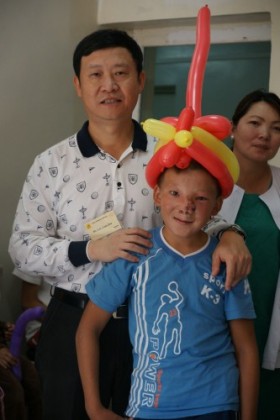 “Thank you doctors from Taiwan!” Noordhoff Craniofacial Foundation's “Love Makes Whole” cleft mission team arrived in Mongolia for the first time at the end of August, helping poor cleft lip and palate children mend their craniofacial deformities and extending their compassion beyond borders.

12 year old Nergui suffered from a rare number two craniofacial cleft, with clefts in both his nose and skull. Nergui and his family lives about 300 km from Ulaanbaatar. In order for Nergui to receive this surgery, his family decided to temporarily stay at a relative's yurt located within a half hour drive from the hospital.

Having endured peculiar stares since he was little, Nergui always kept quiet at school as his speech was unclear due to his cleft lip. His mother often sighed and blamed herself for his deformities. The family was absolutely thrilled as the doctor was able to mend his deformities.

17 year old Erdenbayar never had the chance to undergo a surgery when he was little. He hopes to become a chef after high school graduation, but worries that his cleft lip will hinder him from finding a job. Fortunately, this chance came about for Erdenbayar.

“We had to pay extra attention to hemorrhages as we were operating at a 2000 meter altitude,” said Vice Minister of Chang Gung Hospital's Department of Surgery Dr. Lun-Jou Lo, who took part in the cleft mission. He explained that the surgery was highly challenging as hypoxia in the high mountains causes vascular expansion and can lead to excessive bleeding.

The facilities at the local hospital are old. The anesthesia apparatus, a second hand machine donated by the NCF and the Mongolian and Tibetan Affairs Commission, was the only machine that was working properly. The amount of consumables such as surgical gowns and saline solutions still can’t withstand the hospital's usage. This is why the NCF also hopes that medical facilities in Taiwan can donate their outdated surgery apparatuses.

Dr. Lun-Jou Lo indicated that approximately 300 new cleft lip and palate children are born in Taiwan each year. The occurrence rate is about 1 in every 600 newborns. However, the occurrence rate has been decreasing over the years as some parents of cleft lip and palate fetuses still decide to abort the fetus after seeing its lips through ultrasound at 20 weeks. “You are not us, so you won't understand our difficulties” are often what these parents would say to medical staff that tries to advise them to keep the baby, which makes it hard for the medical staff to continue the conversation.